The founding of Singapore island in 1819 and its early development have traditionally been attributed to Sir Stamford Raffles. He lived on the island for five years. Under his guidance, it developed rapidly into a prosperous free modern port.
On 7th September 2019, the 9th of lunar 8th month. The temple hold a Welcome Banquet as well as international cultural exchange to welcome all the distinguished guests from 26 countries around the world and 216 high Sangha monks. In the evening,Buddhist auspicious canopy invited 43 High Elders Sangha from around the world to enter into the hall and seated at the head table. The graceful sacred dance and the dexterous hand gesture Mudra to respect the Triple Jewel of the Dharma Realm of the ten directions, and women section presented tasty vegetarian cuisine to all the distinguished guests. Chairman of the Preparatory Committee, President of the Singapore Buddhist Association, Venerable Guang Phing deliver a welcome speech, he thanks everyone for attending this commemoration ceremony. He also says that religion is a positive energy on a social basis and can bring harmony and peace, thus is the same as Buddhism. Tonight, we invite all high Sangha leaders from all over the world to gather in Singapore to celebrate the Bicentennial anniversary. From the world perspective, Singapore can promote better and look forward to a bright vibrant, fair and prosperous future.
The vice president of the China Buddhist Association, the abbot of the Nanputuo Temple in Xiamen, Most Venerable Ze Wu, praised Singapore is a free country that is free, inclusive, and multi-ethnic. This commemoration hosted by the Buddhist community to conduct Buddha-Sangha Offering and Buddha-Dharma seminar is to convey the Buddhist concept of harmony and peace. Peace, unity and harmony are at the core of various philosophies in the country, and thus will make better progress and development of the country.
The Vice President of the World Buddhist Sangha Council Most Venerable Chao Chu said today is very honored and very happy to participate in such a meaningful event because this activity can bring the broad benefits to everyone, especially to Singaporean Buddhists.
President of the Australia-China Buddhist Association Most Venerable Bo Rue talks about the development of Singapore. In this multi racial society, everyone mutual tolerance and respect, create peace and unity caused Singapore to be developed into a coexisting harmony country. Most Ven. Phrasophonvachirabhorn Sawai
Deputy Dean of Mahachulalongkornrajavidyalaya University,
said that it is a great honor to represent Theravada Buddhism and the Maha Chulalongkorn University in Thailand. There are Four key points emphasized in our university, namely:

4. living together in harmony to build a peaceful society. 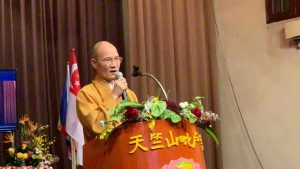 Executive Vice President of Fujian Buddhist Association, abbot of Kaiyuan Temple Fuzhou
Most Venerable Ben Xing in his speech said
There are eight words of wisdom:

4. Dedication, with dedication, our life is more meaningful and wonderful.

The abbot of the Shandao Temple Taipei Most Venerable Da Hui represented Most Elder Venerable Liao Zhong,President of World Buddhist Sangha Council greeted everyone, and also wished everyone mindfulness, auspiciousness, and a successful event. Most Ven. Shangpa Rinpoche from Karma Kadgyu talks about discover Dharma in the activity:

1. Dharma not only use in monasteries, but it should be used in our daily life.

As a laymen one should consolidate and strengthen our faith in Buddhism. One with Dharma will have positive energy to face some problems in life. As a Sangha, it is necessary to take the responsibility of leading devotees and let them take the right path so that the Dharma can be forever live in the world. Vice President of the World Buddhist Sangha Council, abbot of the Mahayana Seng Guan Temple Philippines, Most Venerable Chuan Yin said that this event allows everyone in the room to understand each other, mutual understanding can reduce conflicts, and there will be more harmony and peaceful in the world.
Chairman of the Taiwan Buddhist Association Most Venerable Hong An praised this event inspired and brings so many elders Sangha to gather together. This is our great affinity and
Karmic rewards to have such sacred opportunity to invite all Elder high monks gathered. Blessed deeds produce blessed rewards and achievements. Thus regardless old or young can plant the cause of be save and brings blessings and benefits as limitless and boundless.
Executive Director of the Chinese Buddhist Association, Vice President of the Yunnan Buddhist Association Most Venerable Chonghua best wishes Singapore Nation prosperity and progress,all elders Sangha and devotees healthy and auspicious.
The Chief Vice President cum Hon Secretary
Of World Buddhist Sangha Council, Venerable Hui Xiong in his appreciation speech said as a Buddhist, we must accomplish the career of Tathâgata. We must have the aspirations to seek the Buddha way, to attain the Buddha-hood and to transform all sentience beings,to guide them also to attain Buddha-hood.
The first aspect of Bodhi Mind which is Bodhicitta is one must respect each other mutual respect. In Buddhism we are exhorted to repay the “four kinds of kindness”, for the
kindness of parents, the kindness of the Three Jewels, the kindness of one’s country, and the kindness of other sentient beings. Four kindness have not been repay, we still cannot attain the Bodhi path. Venerable Abbot once again expressed his thankfulness to all the distinguished guests for attending this grand and solemn commemorative event.