Before the Tang Dynasty, Mahayana Buddhism first reach China via Sumatra and Java through missionaries from Nalanda, India. It was a practice of Tantra and Esoteric Buddhism. It has been circulated until now, almost every temple host 24 Devas Buddhist protectors. There are four seasons in a year, and there are 24 solar terms in the four seasons.
Every time when season change 24 protectors will protect the whole universe, especially those who with deep faith in Triple Gems (ie Buddha,Dharma & Sangha),believe in law of cause and effect, practice and cultivate Buddha-Dharma and get rid of the troubles,
end the cycle of birth and death,achieve Buddha-hood. The Mid-Autumn Festival is also a culture of Buddhism.

Mr. Caliadi, the director of the National Religious Affairs was invited to attend the celebration. In his speech said, there are many festivals came from religions. Festivals bring us together in a bond of love, peace and harmony,irrespective of race and religion. Buddhism is a gospel of peace and non-violence. The Buddha taught that peaceful minds lead to peaceful speech and peaceful actions. If the minds of living beings are at peace, the world will be at peace.

The Buddhist teachings are brimmed with thoughts of peace and harmony, and its advocacy of compassion, wisdom and equality is closely related to harmony, peace and amiability.
The President of Indonesia Buddhist Center Association Most Venerable Hui Xiong has made great contribution in the social, charity and education. Through this festival, all community celebrated together and establish an equal and harmonious society.

At the same time, Venerable Hui Xiong also diligently supported various educational initiatives and bursary for primary, secondary , colleges and universities students. He so far has sponsored more than 300 students. He also established free clinic for the needy. The temple distribute free commodity for the poor every week and conducted seminars for the Youths and each event has more than 1,000 youths attended. Furthermore the temple also set up Bursaries or scholarships for deserving students. Every week, the temple residential Sangha visit the cancer hospital and the neurological hospital to concern the patients. Every three months, a blood donation campaign is held in cooperation with the Red Cross, and other charity and social activities are worthy of our praise.
Today, on behalf of the government & Ministry of Religious Buddhism section to present Outstanding Contribution Certificate to Abbot Venerable Hui Xiong in recognition of his 30 years valuable contribution to the Nation, society and charity as well as Buddhism. This same go to Mr Wu RuiZhang who also given the Buddhist Contribution Award. 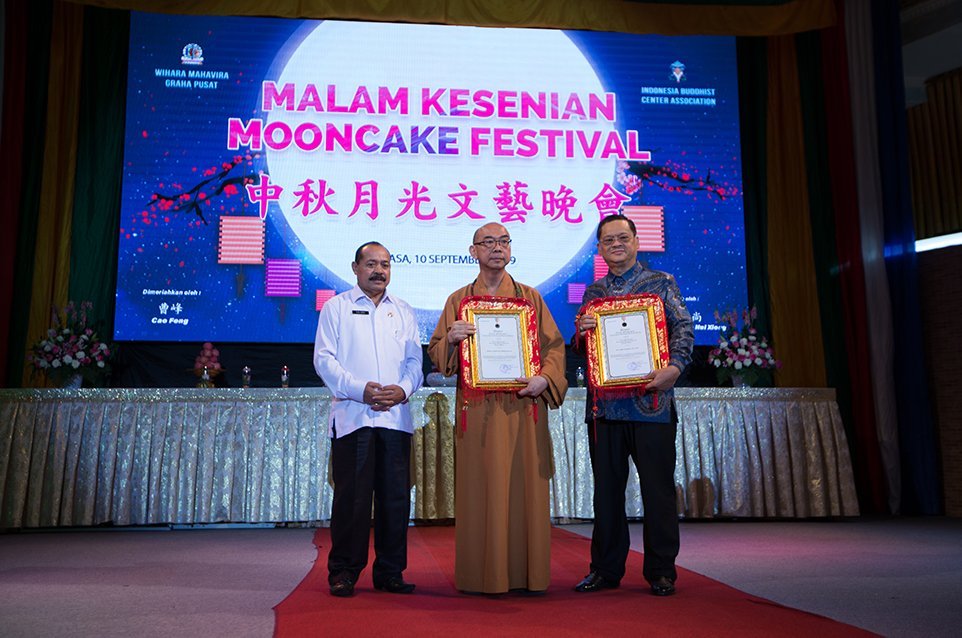 The Minister of Affairs is very appreciative of the great contribution that the Buddhist community has made to the Nation and society. The Five Basic Principles Of The Republic Of Indonesia ( Pancasila) including the country composed of multiple religions. Buddhism propaganda uses wisdom to visualize and devotion with compassion. In a pluralistic society, the Sangha monks play an most important role. Buddhism emphasizes compassions, the importance of the practice of love, compassion, non-violent attitude and tolerance, bring peace, harmony and prosperity to all beings.
The Minister of Affairs finally appealed again to all Buddhists not to be easily disturbed by fake news and cause social unrest. The Representative on behalf of Minister of Affairs to participate in this event and greet everybody have a happy Mid-Autumn Festival. The minister was engaged in the event with the Honorary President to the Papua New Guinea for the ethnic dialogue meeting. The artists from Beijing and Indonesia performed variety show. The Venerable Abbot was invited to deliver Mid Autumn Dharma speech which make the celebration more connotative, and benefits all devotees.

About the Author: admin