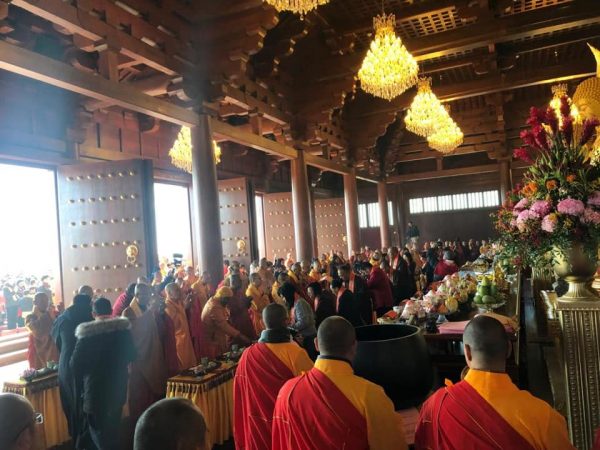 World Buddhist Sangha Counci Venerable Hui Xiong was invited to preside over the Buddha statues Opening Ceremony at Mount Wutai Shan which was constructed and developed by Cham Shan Temple Canada.
On 4th October 2019,Venerable Da Yi Abbot of Cham Shan Temple, and the director general Ms Zi Qing,accompanied Venerable Hui Xiong to Fa Hua Monastery to pay visit to Most Venerable Xing Kong and Venerable Hui Xiong presented gifts to the two elder Venerables while enjoying the traditional vegetarian meal. Seeing the regularization of the life of the two elders Venerable and the formal style of chant before eating meals practiced in Buddhist temples,emphasizes mindfulness awareness practice by abiding to a strict order of precise movements. The usual traditional vegetarian is very special as the Temple food is food with principles, such as being grateful to everyone involved in preparing the meal, eating for health in proper portions, and never wasting even a single grain of rice. Temple food resulted from a Buddhist culture and practice lineage. Thereafter heading to visit Cham Shan Temple went to meet Venerable Da Yi. Venerable Hui Xiong praised for his great contribution to the Canadian Buddhist community.
In the evening, a welcome dinner was held at Premier Ballroom & Convention Centre at Richmond Hill.
The President of Mount Wutaishan Buddhist Association China Most Venerable Chang Shan,led the abbots of the major monasteries,representatives of provincial in China and all devotees to participate in the welcome dinner. The Buddhist song “Praise of Mount Wutai” which was composed by Venerable Da Yi unveil the ceremony. Everybody was impressed by the ability and capabilities of Venerable Da Yi when seeing the film introducing the process of Canada Mount Wutaishan’s developed and constructed. This was the great Bodhisattvas with great vows and mission to propagate and spread Buddhism around the world.
In addition to the abbot’s welcome speech, many elders Venerable were invited to give a speech. The Venerable Hui Xiong in his speech praised the great contribution and capability of Venerable Da Yi. His great idea of building the Millennium Cultural and Historical Dharma Hall of the Tang Styles in Canada, and also the center of the world Buddhist culture and architecture to promote the globalization of the community of Buddhism, the future of science and technology, human pursuit are extremely in fast speed, which can not achieve a balance. Through the equality of humanity, wisdom and compassion, the spirit of Buddhism reaches a balance point in today’s society, and it can reach the interests of society and be happy.
On the morning of October 5th, we took an hour drive from Toronto to Mount Wutai to attend the opening ceremony of the Buddha statues. More than 10,000 devotees attended the ceremony, and the government ministers and many political leaders attended the ceremony. The House of Representatives distributed the award certificate to Most Venerable Xing Kong. The elders monk immigrated to Canada in 1963 and founded Cham Shan Temple in 1967. At that time, the Canadian National Constitution eliminated the policy of Anti-Chinese. At that time, life was hard. For more than 50 years, the perseverance of the Venerable Xing Kong has patiently overcome and made infinite contributions to the society at the time and to the present. The opening ceremony of the Great Hall was grandly completed. Thereafter all high Sangha monks and the dignitaries enjoyed the vegetarian lunch together.
In the afternoon 1.00pm, Most Venerable Xing Kong was invited to led all High Sangha monks around the world in the opening & deliver Dharma Sermons ceremony. At the same time, the Mount Wutaishan enshrined Five Direction Great Manjushri Bodhisattvas statues and opening ceremony for South Manjusri Bodhisattva. Although the project was still under construction, the Ministry of Security only allowed monks to enter the hall, and thousands of devotees only allow to witness the ceremony outside the Dharma hall at the open air square. Everyone attended the ceremony, and smile,with heartfelt expressed the supreme respect for Mount Wutaishan Manjusri Bodhisattva. 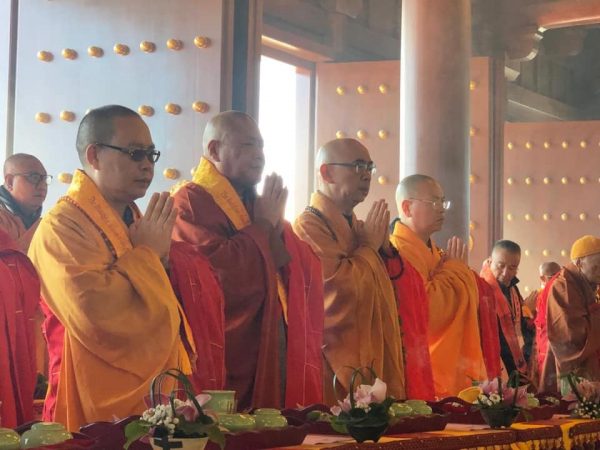 On the morning of the October 6th, Venerable Hui Xiong visited the temples and museum in downtown Toronto.
The first generation of new immigrants of Mahayana Buddhism in Canadian was very difficult. Venerable once again praised the great effort and contribution of Venerable Da Yi to the multicultural religions established by various religious leaders. Venerable Abbot sincerely hoped that Venerable Da Yi will actively lead all Canadian Buddhist monasteries and community to carry forward the Mahayana Buddhism in Canada.